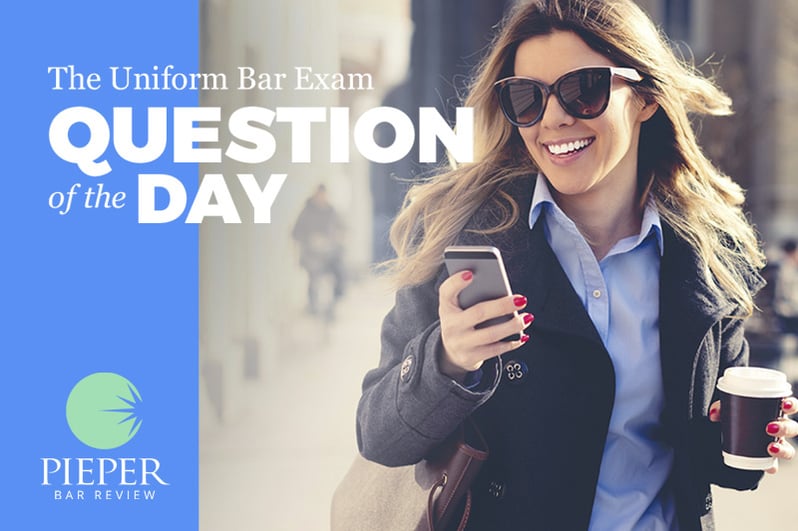 Subscribe to Pieper's Uniform Bar Exam Question of the Day and receive a real MBE multiple choice question right in your inbox every weekday morning.

Pieper Bar Review continues to make studying for the bar exam easier, not only by providing the best bar review course, but by now offering access to sample bar exam multiple choice question.

As a law student, you are focused on the task at hand, passing the bar. This free subscription will help you:

Be sure to share the Question of the Day with your friends and classmates so you can prepare together for the UBE! While fixing a toilet in the bathroom of a grocery store’s stock room, a plumber knocked over several stacks of canned goods, denting the cans.   The cans sat in a puddle of water that had overflowed from the toilet for an hour before the store’s general manager discovered them. The manager then placed the cans, all of which were dirty and dented, in the front of the store with a sign saying they were dented and on sale for half price. A month later, a woman purchased two of the dented cans, which were packed by a can company.

The woman asserted a claim against the can company based on negligence.

Is the doctrine of res ipsa loquitur applicable?

The Answer is C.

The doctrine of res ipsa loquitur permits a plaintiff to establish negligence by inference rather than direct evidence, if she can show (1) that the injury was the type of injury that does not ordinarily occur in the absence of someone’s negligence, (2) the injury was caused by an agency or instrumentality within the exclusive control of the defendant, and (3) the injury was not due to any negligence on the part of the plaintiff. Since it is clear that these cans were not under the exclusive control of the can company (the facts tell us that the cans were in a grocery store and were knocked over by the plumber), the plaintiff will not be able to satisfy the second element of a res ipse claim, and choices (A) and (B) and incorrect.

Choices (C) and (D) are both attractive; however, (C) is the best answer because it highlights the lack of the exclusive control of the defendant. While choice (D) shows some voluntary action on the part of the plaintiff which could result in a failure of the third element of a res ipse claim, it is not clear that her purchase of the dented cans was negligent. Therefore, (C) is a better choice than (D).

While choice (D) arguably might be relevant on a claimed defense such as contributory negligence or assumption of risk, it is not relevant on the issue of why the food was not fit for consumption. Since the food in the undamaged cans was fit for consumption, it is reasonably clear that the other food became unfit as the result of being knocked over. Since we know the cause of the woman’s harm, choice (A) is also incorrect.

Choice (C) is correct because we know that the food probably became unfit due to the damage that occurred to the can. Indeed, we have direct evidence of the same. Thus, we do not need the doctrine of res ipsa loquitur.